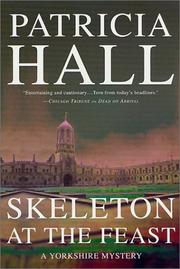 SKELETON AT THE FEAST

Sending Bradford’s Detective Chief Inspector Michael Thackeray (Dead on Arrival, 2001, etc.) to a training course at Oxford to help him heal from his latest trauma—the ambush of two of his detectives—may not have been Superintendent Jack Longley’s best idea. In the ivy-covered courtyards of St. Frideswide’s, his latest demons, left in the wake of Detective Constable Rita Desai’s death and the mental collapse of her partner, DC Kevin Mower, merely provide company for the earlier demons of Thackeray’s unhappy college years, which culminated in the suspicious death of Liz Selby, one of the first six women admitted to Oxford. And now Hugh Greenaway, Friddies’ master, wants Thackeray to look into the disappearance of Mark Harrison, a tutor who decamped, his latest lover in tow, along with several graduate students’ unfinished theses. Thackeray remembers Harrison as a college-mate who tormented him for his Yorkshire accent and bookish ways. He also remembers Harrison’s wife Penny, then a rosy undergraduate, now a gaunt wraith who begs him to investigate not only her husband’s departure but the heroin death of their son, ruled an accidental overdose in an all-too-dismissive inquest. As Thackeray pursues crimes in high places, a teetering DC Mower plumbs the lower depths, searching the council flats of Bradford’s western edge to discover who raped and beat 12-year-old Kelly James, left to prowl the pubs Saturday night while her 20-something mother entertained herself with her latest boyfriend.