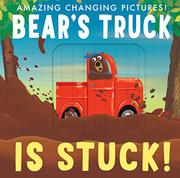 From the Amazing Changing Pictures series

Can anyone help Billy Bear get his truck out of the deep mud?

No question about it, Billy’s truck is thoroughly mired—“The big wheels turn and spray and churn / in the thick and gloopy muck.” But the rhyme seems to be driving the plot rather than the other way round. Following a comical but random scramble in which a gaggle of eager sheep drives a tractor into the adjacent pond and Clara Cow tumbles down the hill with the farmer’s rake, all the animals get together to “push and pull,” “lug and tug” (pushing is all that’s going on in the art, though) until “the truck’s unstuck!” Despite lots of spattered mud in Truong’s neatly drawn pictures, somehow none of it sticks to either the truck or any of the animals except (sometimes) the pig. Moreover, four leaves feature framed dissolves that transform the cartoon scene when the cover or a large flap is lifted open, but the moving parts are so poorly integrated with the illustrations that odd fragments are left hanging on most of the tabs. As for the storyline, pull out Marie Hall Ets’ classic Elephant in a Well (1972) or any version of “The Great Big Enormous Turnip” for a better telling.

Despite the gimmick, likely to draw no more than flecks of interest from either truck fans or muck fans.