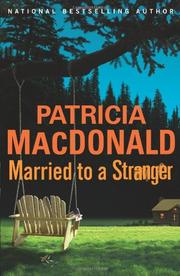 MARRIED TO A STRANGER

MacDonald’s latest matron-in-distress is a bride who fears that her bridegroom is the man who nearly killed her and intends to try again.

Although Burke Heisler, the psychiatrist who runs the New Jersey clinic where Emma Hollis works, has made it painfully clear that he doesn’t reciprocate her crush on him, things have worked out better for Emma than for her boss. Burke’s marriage to Emma’s old roommate, mercurial poet Natalie White, has ended with her suicide, but his introduction of Emma to his old friend, freelance writer David Webster, has led to a whirlwind romance, a welcome pregnancy and a wedding. Hours after the nuptials, however, Emma’s idyll ends with shocking suddenness at her honeymoon cabin in the Pine Barrens. While David’s stepped out to chop firewood, she’s attacked by a masked stranger wielding an axe. She and the baby she’s carrying survive the assault, but a providential hunter who comes to her aid isn’t so lucky. On top of her physical injuries and her psychological trauma, Emma has to deal with the broad insinuations of Lt. Joan Atkins, the cop who’s convinced that David wanted Emma’s money but didn’t want to wait for it. Can Emma really trust the man who swears he hasn’t been to the cabin since he was a child even though a witness has placed him there a few months ago, a man who keeps his desk drawer locked and lies about the reason, a man whose sudden disappearances coincide all too neatly with the continuing attacks on her? MacDonald (The Girl Next Door, 2004, etc.) stocks her cast with other guilty-looking parties, from the oily second husband of Emma’s mother to a disgruntled father convinced his daughter’s death from anorexia is Emma’s fault. And although Atkins never considers female suspects, there are plenty of them as well.