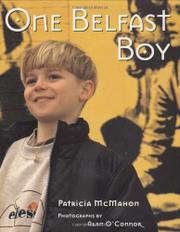 It’s hard for most US readers to imagine what it is like to grow up amid ongoing violence, but that is what Liam’s life has been in Belfast. However, this 11-year-old’s family life, school, and dreams will be known to children everywhere. After providing an overview of “the Troubles,” McMahon movingly describes the conditions of Liam’s existence: a Catholic, he has never known a Protestant—“peace walls” separate the Catholic and Protestant sections of Belfast. On his way to school, Liam passes buildings with large messages painted on them: “Brits Out,” or “No Surrender.” Family and school conversations often include passing references to a bomb going off. O’Connor’s full-color photographs show all the aspects of Liam’s life, including his training for a boxing match; the boy loses, but rather than believe that the judges ruled against him because of where he’s from, he quotes a rule he has learned—“We win, or we lose. Then we go on.” This book provides a realistic glimpse of a place where peace has taken a fragile hold, and offers a reminder that the dreams of children can flourish amid misery. (map) (Nonfiction. 7-12)