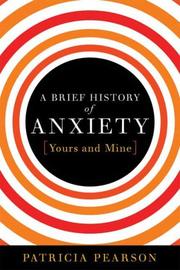 A BRIEF HISTORY OF ANXIETY

In this slim but well-constructed book, the author weaves her own experiences—she was officially diagnosed with “generalized anxiety disorder” at age 23, following a nervous breakdown caused by her breakup with a man she “loved as fiercely as Heloise loved Abelard”—with a lively history of anxiety and its many sufferers. She begins by exploring the murky relation among fear, anxiety and depression: “Our fears are private, arbitrary, idiosyncratic, and very often masked. Anxiety rages undetected in the mind, both secretive and wild.” And she employs a pleasing blend of personal anecdote and historical context. Despite her often playful tone and poetic, evocative language, Pearson provides countless intriguing historical examples, backed by an extensive notes section, including discussions of ancient philosophy, medicine and theology; Darwin’s treatment of his hypochondria (he was sprayed with a hose); American composer Allen Shawn’s agoraphobia; and the Middle Ages practice of summoning animals to court to stand trial, simply in the interest of holding something accountable when things went awry. She also examines contemporary manifestations of anxiety: widespread depression and fear of being fired from one’s job; pressure to succeed, illustrated by the case of Kaavya Viswanathan, the Harvard sophomore who in 2006 was shown to have plagiarized most of her much-hyped debut novel from other authors; and Flu Wiki, a website devoted to those obsessed with an epidemic outbreak of influenza. Most readers won’t be surprised to learn that, according to a World Mental Health Survey, the “United States has the highest level of anxiety in the world, with a lifetime prevalence rate of 28.8 percent.” (Compare that with Mexico, in which, according to the author, 93.4 percent of people have never experienced an instance of anxiety or depression.) The author concludes with a chronicle of her negative experiences with prescription drugs like Effexor and Lexapro, and the charge—a common one these days—that psychiatrists are overprescribing in lieu of less-invasive treatments like behavioral therapy.