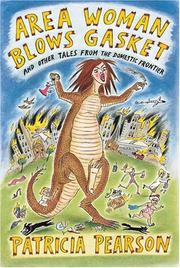 and Other Tales from the Domestic Frontier

Pearson’s gently satiric essays, many originally published in the National Post, seem to have lost their stringency this far south, where debates on carcinogenic foods, the invasion of privacy by credit departments and the evils of daycare have been swirling around for years. Written in a punchy, bulleted style meant for easy digestion, Pearson’s flippant pieces excoriate the newfangled (American) way of food efficiency in favor of old-fashioned cooking: e.g., microwave popcorn’s “flavor vapors” may cause cancer, so she offers the cheaper kernel-pot method. For Christmas, she eschews annoying electronic toys for her two small children in favor of such home-style devices as a stick, the cat and toilet paper. She has rejected the “hostile little ecosystem of female rivalry, with a smell of sugar-coated bitchiness,” also known as the department-store beauty department, and now frequents a barbershop for a $15 haircut. To mitigate the guilt of dumping children in daycare, Pearson “researched” biographies of some famous people who grew up under surrogate parents (Elizabeth I, Jane Austen) and concludes, “Studies show that thinking of oneself as a semi-divine being can often compensate for decapitated or working mother.” The substantial last section takes place in the village of Tepoztlan, Mexico, where the author holed her family up for six months to find “simplicity,” and instead battled mangy dogs and importunate landlords. Frustrated by the language barrier, she offers some poignant remarks on being a new immigrant (she now sympathizes with New Canadians who bemoan the “Aura of Rank Stupidity” their beginning English conveys) and a very funny anecdote about visiting el dentista where “dolor” becomes “dollars.” Overall, Pearson’s voice is almost engagingly naïve, though her subjects are fairly derivative.

A Great White North pundit altogether too nice for south of the border.