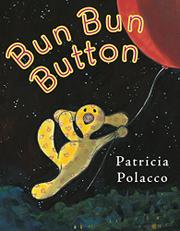 “We Darlings have always been lucky,” says Gramma, as she and Paige make cookies together and feed the five cats and two dogs. Then they sit in the Old Blue Chair to cuddle and read. While everyone seems to have their own toy, including the pet squirrel, Paige doesn’t, so Gramma makes Bun Bun Button out of calico. Bun Bun goes everywhere with Paige, even to the park, where Gramma gets her the reddest and roundest of balloons. Paige wants Bun Bun to fly, too, but even though she is very careful and ties the balloon string onto her wrist and listens to Gramma’s admonitions, Bun Bun and the balloon go off into the sky—but Darlings have always been lucky. Polacco’s exuberant and expressive pictures convey Paige’s excitement and delight, and the spread in which she cries while Bun Bun flies off is a perfect childhood howl of anguish. The identical cats and the twin dogs (and the goldfish and squirrel) have whimsical and sometimes knowing expressions.