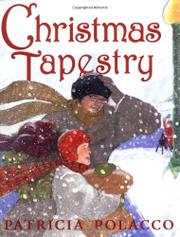 This longer Christmas story centers on an embroidered tapestry purchased to hang in a church for the Christmas Eve service. As with many of her works, Polacco (When Lightning Comes in a Jar, p. 665, etc.) sets her story in Michigan, this time in wintry Detroit. Young Jonathan resents his family’s recent move from Tennessee to where his minister father has been reassigned to renovate an old church and revive its congregation. Through a series of Dickensian trials and coincidences, the tapestry is purchased to cover some water damage to a church wall, and an elderly Jewish woman (and Holocaust survivor) whom the family has befriended recognizes the tapestry as the one she made in pre-WWII Germany for her wedding ceremony. In an ending worthy of O. Henry, the repairman who arrives on Christmas Eve to inspect the water damage turns out to be the woman’s long-lost husband (each thought the other had died in the Holocaust), and the devoted couple is reunited. Polacco succeeds as always with her watercolor-and-pencil illustrations in creating unique, expressive characters who seem to have real lives in their snowy city streets, cozy living rooms, and busy church. The gentle, reassuring message, suggested to Jonathan by his kindly father, is that “the universe unfolds as it should,” even when we don’t understand the pattern of the tapestry. (Picture book. 7-10)