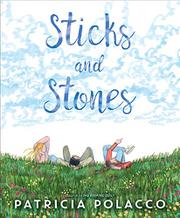 Veteran picture-book creator Polacco tells another story from her childhood that celebrates the importance of staying true to one’s own interests and values.

After years of spending summers with her father and grandmother, narrator Trisha is excited to be spending the school year in Michigan with them. Unexpectedly abandoned by her summertime friends, Trisha quickly connects with fellow outsiders Thom and Ravanne, who may be familiar to readers from Polacco’s The Junkyard Wonders (2010). Throughout the school year, the three enjoy activities together and do their best to avoid school bully Billy. While a physical confrontation between Thom (aka “Sissy Boy”) and Billy does come, so does an opportunity for Thom to defy convention and share his talent with the community. Loosely sketched watercolor illustrations place the story in the middle of the last century, with somewhat old-fashioned clothing and an apparently all-White community. Trisha and her classmates appear to be what today would be called middle schoolers; a reference to something Trisha and her mom did when she was “only eight” suggests that several years have passed since that time. As usual, the lengthy first-person narrative is cozily conversational but includes some challenging vocabulary (textiles, lackeys, foretold). The author’s note provides a brief update about her friends’ careers and encourages readers to embrace their own differences. (This book was reviewed digitally with 11-by-18-inch double-page spreads viewed at actual size.)

Deliberately inspirational and tinged with nostalgia, this will please fans but may strike others as overly idealistic.