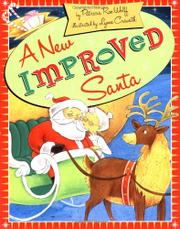 Precipitated by a certain snugness in his special seasonal suit, Santa suffers a serious, year-long identity crisis in this comical offering from Wolff (Cackle Cook’s Monster Stew, 2001, etc.). He goes on a diet, lifts weights, cuts and dyes his hair and beard, tries out new clothing styles, and gets a boom box and a computer. Santa experiments with different transportation methods and finally replaces his sleigh and reindeer with a “roaring red rocket-copter.” The children who talk to him about their gifts in December, however, don’t like the new Santa, because he looks like an unfamiliar stranger, of course, and his transformed looks even make one little girl cry. Presto, change-o, with Mrs. Claus’s help, Santa returns to his roots (white hair and all) and decides it’s OK to be old-fashioned. Patient Mrs. Claus declares that Santa really is new and improved, because now he’s smarter, having learned something important about himself. Cravath (The Princesses Have a Ball, p. 1215, etc.) provides some ingenious interpretations of Santa’s new wardrobe and hairstyles, as well as his attempts to use all the latest contraptions of foolish mortals. The entire work pokes gentle fun at those adults who seek to reinvent themselves, with yet another interpretation of the ever-reliable “to thine own self be true” theme. (Picture book. 4-7)