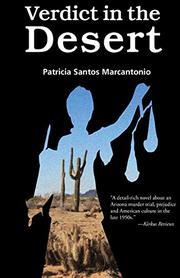 VERDICT IN THE DESERT

A detail-rich novel about an Arizona murder trial, prejudice, and American culture in the late 1950s.

Without question, María Sánchez Curry killed her husband, Ben, with whom she fought all the time. Indeed, she “had never seen him so peaceful” as when he lay dead with a kitchen knife in his chest. María is arrested and charged with first-degree murder. She had feared for her life and insists she didn’t mean to kill Ben. Judge Morton assigns the unwilling Michael Shaw to defend her. Michael is a hard-drinking lawyer deeply unhappy with his wife, Jenny, and his job at his father’s law firm. But no matter, he says. “My clients never know I’m hung over. I’m that good.” The court assigns Antonia Teresa “Toni” García as a translator so that Spanish-speaking María and English-speaking Michael can understand each other. In time, Michael and Toni fall in love, with abundant complications following—their affair gets everyone’s notice, including his father’s and his wife’s. Viewpoints shift frequently, showing the deep anti-Mexican attitudes in the community. Many think the “white” Ben should never have married a Mexican anyway, that the Mexicans are just here in America to cook and clean. The courtroom scenes feel realistic, and many descriptions are beautifully done. There's plenty of back story, and the plot doesn't hurtle forward like a courtroom drama generally does. While these digressions slow the pace, they are never long, and they provide depth for the more important characters. María and Toni seem the most true-to-life, while Michael is the smart gringo attorney with more than the usual emotional baggage.

Despite quibbles, a fine read that lays bare a less-than-glorious side of America’s recent past. Fans of courtroom dramas will enjoy it as will anyone who enjoys a meaningful story.