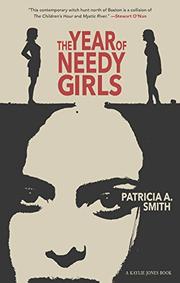 THE YEAR OF NEEDY GIRLS

When a 10-year-old boy is murdered and a high school teacher is accused of molesting a student, a small Massachusetts town is rocked to its ignorant core.

In the prologue of Smith’s debut novel, a Little Leaguer named Leo Rivera is kidnapped by his next-door neighbor, an unprepossessing auto mechanic named Mickey Gilberto. Not long after, Leo’s corpse is found at the bottom of the river in a plastic container. Meanwhile, lesbian Deirdre Murphy, a dedicated and popular French teacher at a private girls’ school, has been canned because an uptight mom witnessed her daughter planting an unsolicited kiss on the teacher’s lips. These two events tangle in the public imagination to produce a citywide outbreak of homophobia and a weirdly nonsuspenseful witch hunt, since the reader already knows who did and didn’t do what to whom. On the same day Deirdre loses her job, her librarian partner, SJ, attempts to break off their relationship, though bad timing prevents the severing of the limp connection. SJ has also recently received a problematic smooch—hers from the murderous pedophile Mickey Gilberto, whom she’s been tutoring in reading at the library. Even after the unasked-for kiss, she can’t help thinking he’s a nice guy. Alienated as they are, Deirdre and SJ can give each other no support as they endure their twin trials; each mentally muddles through her own back story and future prospects as she becomes the focus of police and public suspicion. The most promising part of this book is the depiction of Deirdre’s teaching, but it's buried under an avalanche of half-baked elements: police work on the two cases, unconvincing letters to the local paper, two-dimensional supporting characters, and unwarranted allusions to The Scarlet Letter. “How did Hester Prynne do it? she wondered. How did she face the town with her quiet pride and go on living her life, raising Pearl, not minding what anyone said or did? Deirdre didn’t think she had the strength in her.”

Bites off more than it can possibly chew, then—poof—makes it all go away in the last 20 pages.