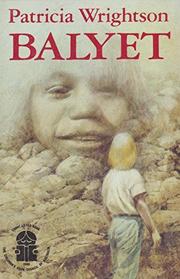 Drawing again from aboriginal Australia's rich folkloric heritage, Wrightson weaves a spellbinding tale about Balyet, abandoned—as punishment for a sin—to live forever alone. Jo, a 14-year-old white girl, has come with her elderly aboriginal friend, Mrs. Willet, to the hills to camp while Mrs. Willet—a powerful "Clever Woman"—tends her people's sacred sites. Jo has an ulterior motive: seeing her friend Terry, who is nearby with his brother, Lance. She chafes under Mrs. Willet's admonitions about danger in the ancient hills until Balyet appears—a voice, a wisp of fog, a shadow, a sorrow—and abducts little Kevin, whom Jo has promised to tend but forgets when Lance lures her off on his motorbike. After Kevin's narrow escape, Mrs. Willett tells Jo that Balyet's sin was loving blood brothers, who killed each another as a result; in retribution, her people left her. Though time has diminished her to a shadow, she is denied death's release. Empathizing with Balyet's grief, drawn to her as a kindred being, feeling that her punishment is cruel and unfair, Jo is almost lured to her own death before Mrs. Willet is able to reason with the ancient spirits and save both willful girls. Sorrowful, elusive Balyet is a compelling creation; the parallel with modern Jo adds depth to a story that poetically explores the characteristic Wrightson theme of interdependence and continuity among all creatures. This may be Wrightson's best yet.