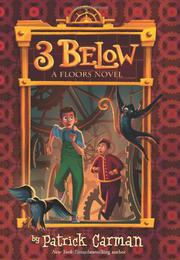 From the Floors series, volume 2

When Leo learns that Merganzer D. Whippet, ex-owner of the Whippet Hotel (now in Leo’s capable if fumbly hands) and maker of wacky inventions, had neglected to pay the hotel’s taxes to the tune of $700,000, he has to unravel Merganzer’s strange instructions in order to save the joint from sale to an avaricious developer. (Actually, it is $7 million, but Merganzer is challenged in the 0’s department.) But it is as though Merganzer is speaking in tongues: “Remember!...Four Floogers, a zip rope, and the iron box!...An isle of Penguins, a boy named Twist, Robinson Crusoe!” Carman, however, is an intricate yet bell-clear storyteller, all the many wheels freely spinning but meshed, and soon a Flooger is as obvious and necessary as the pink rhinoceros in the diamond mine. The characters are slap-happy and tomfool without overdoing their weird behavior, though Carman may be at his best in creating the very strange world of the hotel, from its magical, duck-infested rooftop to the Realm of Gears in the super-sub-basement. Then, when all seems lost, in rides the cavalry, as is only right.

An adventurous romp, as atmospheric as incense and as smooth as lemonade on a summer day.