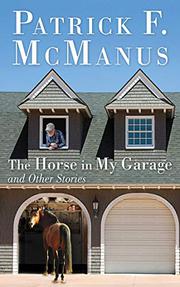 THE HORSE IN MY GARAGE AND OTHER STORIES

McManus (Kerplunk: Stories, 2007, etc.) repackages some of his magazine writing into a handy collection of stories loosely based on life.

Some of these first-person narratives are more loosely based than others. McManus identifies “$7,000 TV Historical Extravaganza” and “Wild Life in a Room with a View” as “factual articles” that “pretty much represent the highpoint of my article writing.” Another piece, “A Bit About My Writing Life,” may even be autobiographical, discussing as it does the protagonist's family life, education and marriage to Darlene (who appears as “Bun” in other tales). Here we learn that Milton Pederson, an instructor at Washington State College, once told the narrator to “look for the telling detail.” McManus often works on the far side of memoir, where truth and untruth sometimes blend into fiction. In this delightful region, we meet the “ghost b'ar” that might have killed Ginger Ann's pig and two boys who intrepidly stalk the woods in the freezing twilight, then hide from wolves that appear where once there was a log pile. Other memorable characters on the far side include the old woodsman Rancid Crabtree and boyhood chums named Retch Sweeny and Barney Wapshut. McManus’ is a world of canoeing adventures, fishing tales, hunting trips and harrowing adventures with chain saws. Then there's the tale of Harold and Emma and what happened after she pickled the goldfish. McManus finally returns to the story of life with Bun, having thoroughly confused us as to what actually happened and what he made up just for fun.

A nice opportunity for nonmagazine readers to catch up with this engaging humorist, who never met a tall tale he didn’t like.