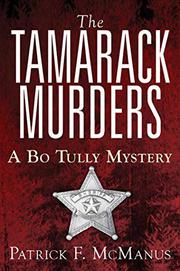 How many men does it take to rob a bank? One to stuff the money into a trash bag; one to drive the getaway car; one to cause a diversion on the escape route; and one to mastermind a plan that goes off without a hitch—unless you consider a rifle blasting one of them to smithereens on Chimney Rock Mountain to be a problem. When he’s not tossing arch innuendos in the direction of his curvaceous secretary, a bodacious FBI agent, a toothsome medical examiner and the unhappy wife of a possible suspect, Sheriff Tully (The Huckleberry Murders, 2010, etc.) relies on the irascible former sheriff who happens to be his daddy, his assistant deputy, Lurch, and a self-taught tracker who doubles as the owner of Dave’s House of Fry to make sense of deer and elk stampeding in the snow so that he can figure out where all the bank’s money is hidden. On the way to a solution, four more will die, lies will be bandied about, and a little old lady librarian will have the time of her life reconnoitering a crime scene.

A wispy second-rate effort from the usually accomplished McManus, who tries this time for quirky but has to settle for preposterous.