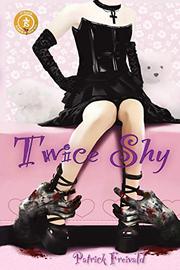 And you think your mom is weird.

A carrier of Zombie Virus since birth, Ani died two years ago. Since then, her mom—formerly a top ZV researcher, now Ani’s high school nurse—has kept her daughter’s body more or less intact and her brain-eating impulse largely in check, all the while feverishly working on a cure. With her mom’s encouragement but against her natural inclinations, Ani joins the emo crowd at school to justify her pale skin, decaying-body-concealing clothing and job at the gaming shop, whose incense helps to mask the ever-present scent of formaldehyde. Less an action-adventure than a study of this peculiar mother-daughter relationship, Freivald’s debut milks all humor inherent in the situation while avoiding none of the darkness. The juxtaposition of the aggressively normal against the completely bizarre—Ani and “Dr. Frankenmom” unpack the bananas before heading downstairs into the state-of-the-art lab for more serum testing—is just right. As junior year lurches along (just like Ani on her perpetually broken hip), Ani finds herself chafing against her mother’s restrictions and caught between two boys: the seriously unhinged emo Dylan, who is obsessed with death, and the utterly adorable jock Mike, a childhood friend whose psycho girlfriend targets Ani for bullying. If some plot twists and secondary characterization falter, Ani’s intelligent, ZV-enhanced snark never does.

A compulsively readable and pleasantly different zombie tale, all the way to its pull-no-punches end