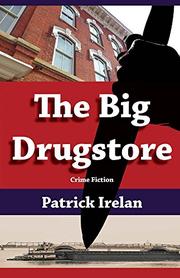 A shamus who plies his trade in the Quad Cities of Iowa and Illinois, where “the best we could hope for was a day without toxic spills,” lands a case that begins with the shoplifting of a tube of toothpaste and leads swiftly to multiple murder.

William Morrison has hired the Scofield Detective Agency to keep an eye out for shoplifters in his Morco Drugstores, and that’s exactly what Mike Scofield is doing—in fact, he’s apprehending Kathy Dove with the toothpaste in her purse—when someone sneaks into the office and buries a knife in store manager Jason King’s chest. Morrison wants Mike to go back to his security beat and let the police do their job, but Mike’s dander is up; it won’t be good for his agency if he doesn’t play an active role in catching the killer. Morrison agrees to bankroll his investigation, but that’s Mike’s last piece of good luck. Kathy Dove (not her real name, alas) disappears, and even after Mike’s junior associate, Carlos Lorca, finds her stripping in the Gentleman’s Retreat, her story of being paid $100 by some drunk to distract Mike just leads Mike to a very dead drunk. The episodic plot spirals thereafter through the discovery of a multilayered insurance scam, several more corpses, a record number of chiropractors, the requisite sharp-looking dames (one of whom Mike seduces, a second of whom seduces him), and a thousand wisecracks, some of them equally sharp, others more familiar than funny. The solution to the case, which is as surprising as it is logical, has very little to do with what’s come before.

Irelan (The Miracle Boy, 2013, etc.) plots as lackadaisically as Raymond Chandler, and Mike seems to think he’s Philip Marlowe. He’s not, but this first case could put the Quad Cities on the sleuthing map, especially since a sequel is reportedly in the works.