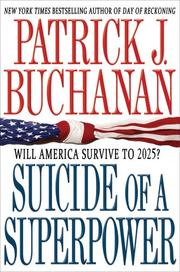 SUICIDE OF A SUPERPOWER

Buchanan (Churchill, Hitler, and "The Unnecessary War": How Britain Lost Its Empire and the West Lost the World, 2009, etc.) mourns the passing of the America of his youth.

The author laments the fading of the Christian religion from American life because he sees it as an indispensable underpinning of our common culture. He notes the social ramifications of the collapse of the family—birthrates below replacement levels, skyrocketing illegitimacy rates—as a result of which whites in American will become a minority by 2042 and entire nations in Europe and Asia are headed for extinction. He fears the nation has abandoned its historic commitment to liberty and equality of opportunity to pursue a chimerical utopia of diversity and equality of result. In short, "[w]e are trying to create a nation that has never before existed, of all the races, tribes, cultures and creeds of Earth, of which all are equal. In pursuit of the perfect society of our dreams we are killing the country we inherited—the best and greatest on earth.” Despite the gloomy title, Buchanan does not really see America disappearing by 2025. He does see culture wars without end and a continuing self-segregation of Americans by ethnic group. While he offers some policy recommendations of uneven quality, many of the trends he deplores—the diminishing influence of Christianity, for example, and the vanishing fertile nuclear family—are prevalent throughout Western culture and all but immune to government influence.

Liberals may rightly dismiss this sprawling, often rambling book as nativist claptrap. Readers willing to excuse the nods to predictable right-wing shibboleths and bogeymen will find it a troubling analysis of how America has changed for the worse in the last half century, and how difficult it will be to pull it back from the loss of freedom and prosperity Buchanan sees not far ahead.