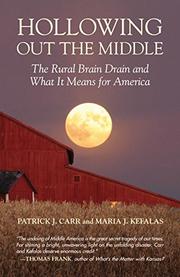 HOLLOWING OUT THE MIDDLE

The Rural Brain Drain and What It Means for America
by Patrick J. Carr and Maria J. Kefalas
BUY NOW FROM
AMAZON
BARNES & NOBLE
LOCAL BOOKSELLER
GET WEEKLY BOOK RECOMMENDATIONS:

The American heartland is committing suicide, with profound implications for the whole country, write husband-and-wife team Carr (Sociology/Rutgers Univ., New Brunswick) and Kefalas (Sociology/Saint Joseph’s Univ.). For decades, parents and teachers in small towns such as Ellis—the pseudonymous Iowa community in which the authors lived and conducted research for more than a year—have funneled their brightest young people to college and to careers in big cities. Meanwhile, neglect befalls their less-gifted peers, who are condemned to blue-collar jobs with stagnant wages, or to poverty. The authors acknowledge that this problem is not new. But in a postindustrial economy that prizes education, the process will eventually turn rural communities into impoverished ghost towns. Carr and Kefalas categorize Ellis’s young people according to their defining traits: Achievers, Stayers, Seekers, Returners. The authors’ classification system makes sense, but their justification for making rural rejuvenation a national priority is thin at points. After mentioning the potential role of the rural Midwest in sustainable agriculture and energy, the authors drop the potentially intriguing thread. More convincing is their depiction of the dead-end lives of individual Stayers. Carr and Kefalas concede that it would be wrong to abort promising students’ futures outside their hometowns, but they prescribe more investment in the Stayers, from community-college–based retraining programs to expanded Internet access in rural areas. The latter, the authors suggest, could also attract high-talent immigrants and even coax a few Achievers into staying.

THE LEFT BEHIND
by Robert Wuthnow
Indie

JEFFERSON, THE ARMY, AND THE INTERNET
by Harvey Meyerson
Newsletter sign-up