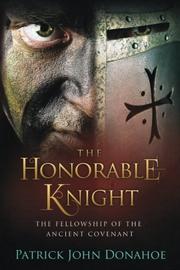 From the The Fellowship of the Ancient Covenant series, volume 1

Donahoe tells a story of friendship and courage spanning the ages in this debut adventure novel.

A Navy SEAL, a mercenary commando, a Mossad operative, and a CDC agent don’t seem to have much in common at first, but Ian, Jacques, Serena, and Desiree go back a long way. Almost a millennium, in fact. When they first meet in Jerusalem, their visions of saving the world center on the First Crusade. Ian is a humble farmer who longs for the honor of knighthood, Jacques a spoiled son of wealth and means who dreams more of glory than of helping common people, Serena a blacksmith’s daughter with strong opinions and few prospects besides marriage, and Desiree a nurse who knows her worth more than those around her. But their quest is far greater than they realize, and they are soon approached by a mystic Covenant, a group dedicated to saving humanity however it can, and which includes even the Magi present at the birth of Jesus. Gifted with supernaturally long lives, a pull toward those in need, and even the occasional miracle, the four turn against the Crusades to defend the Holy Land. Today, with their diversity, skill, and friendship even greater assets than before, they strive for peace for all, defending the world against terrorism and biological attacks. The greatest strength of this first installment in a series lies in its use of both the past and present. The dichotomy of medieval adventure story and modern military thriller makes each new chapter a joy to read. And while the characters already are three-dimensional and well-crafted in each timeline, the addition of knowing where they came from in the distant past and where they will land in the future infuses new depth, making the nods to how they’ve changed (and how they haven’t) a real treat. Finally, the details of both timelines feel genuine and well researched without becoming dry, and the plots are dynamic and page-turning, making the story a truly rich journey, with plenty to look forward to in future books.

A spellbinding tale that traces four steadfast protectors of humanity in a changing world.