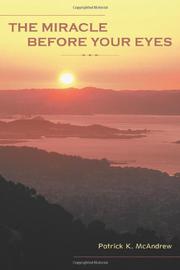 THE MIRACLE BEFORE YOUR EYES

One man’s account of his spiritual journey from confusion to a peaceful Christianity.

In his nonfiction debut, McAndrew looks back on the beginning of his spiritual journey, decades ago, when he was feeling a bit burnt out at the restaurant where he worked. Frazzled by his temperamental managers and spurred by a shocking tragedy that happened one night, he began what would become a lifelong search to understand “the invisible matrix of life that is God.” He increasingly interrogated the worldly assumptions of his life, guided by a new openness to put aside the doubts of the world and do as the Holy Spirit calls Christians to do: “walk out on the Sea of Life.” In order to do so, McAndrew writes, “we must let go of our doubts and fears, and trust the infinite oneness.” McAndrew describes this slow, sometimes-grudging process of growing spiritual freedom with a moving directness, relating family anecdotes involving his wife, Yvonne, and his wise-beyond-her-years daughter, Shavonne, with the flair of a novelist. All of it is meant to illustrate the familiar modern Christian adage, “When you get to your wit’s end, you will find God lives there.” McAndrew puts it simply, “That’s what happened to me.” The book’s confessional strengths are only slightly offset by its exegetical weaknesses. McAndrew writes, for instance, that in Genesis, “the primordial substance of the universe is light,” when the biblical text clearly states otherwise, or when he contends that a study of St. Peter’s words and actions shows that “trust in Spirit developed over time,” when precisely the opposite is the point of his sudden awakening on the night of Jesus’ arrest. But such quibbles don’t much distract from McAndrew’s larger message of surrendering worldly vanity to “the harmony of the Kingdom”; the book will provide younger Christians especially with an appealingly personal and spiritual version of the faith.