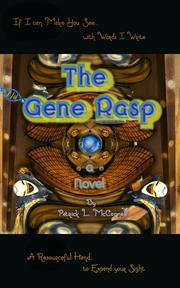 An SF novel focuses on an unconventional inventor and his remarkable creation.

McConnell’s book takes the form of an autobiography of his main character, born Tom Spoon and renamed Tom Maloof after the famous woodworker Sam Maloof. Sam not only gave Tom a glimmer of future promise while he was languishing in a boys home, but also used his influence to gain the teen admission to a university. Even in those early years, Tom is an engagingly self-effacing character, often reflecting on his life. “I would think of how things would be different if I had grown up in a normal family,” he muses at one point. “I would later learn that no family is ever normal.” Tom goes on to invent a miraculous device called the Gene Rasp, a way to manipulate genes, “a tool that could cull the chaff from the wheat.” The invention can effectively reengineer individual genetics, offering a cure not only for cancer, but for all kinds of genetic deviations and medical problems as well. Around this narrative center, McConnell expands two larger stories: one involving Tom and the intriguing friends and colleagues he makes along the way and the other indulging in a great deal of his own digressions on a wide variety of scientific, personal, and even philosophical topics. “The longer the distance the stranger the memory,” he observes. “Memory is fractal, splintering and glimmering and cascading.” A lot of the ambitious and thought-provoking story reflects that kind of cascade. The author is a generally entertaining writer throughout the fictional memoir, delivering many rich details. But he sometimes displays a weakness for throwaway clichés (“The mind is not only a terrible thing to waste,” he writes at one point, “it’s a very difficult thing to understand”), and he underestimates how distracting the myriad digressions can be. The intricate text includes not only copious amounts of poetry, but also frequent URL links and scanning tags designed to share key songs and sound clips with readers.

An engrossing, if sometimes overly talkative, tale of a groundbreaking inventor.