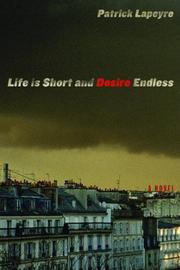 LIFE IS SHORT AND DESIRE ENDLESS

One need look no further than the apt title to uncover the frustrations of the two main male characters.

At one point in the novel one of Nora Neville’s lovers wonders whether “she secretes an active substance when she comes in contact with men, one that singlehandedly makes them fall at her feet,” and after a brief acquaintance, the reader is persuaded that this is an accurate depiction of her singular powers. Although she’s reputed to have many lovers, Lapeyre focuses on two: Murphy Blomdale, an American businessman living in London, and Louis Blériot, a hapless Parisian even more desperately in love with the elusive and provocative Nora. Blériot is a translator, and when the novel opens he hasn’t heard from Nora for two long and anguished years, but he gets a phone call—fortuitously on Ascension Day—and they rekindle their relationship. Although Blomdale had been sharing an apartment with Nora, Blériot is more secretive and constrained, of necessity because he’s married to Sabine, a French intellectual in whom he’s lost interest since his introduction to the alluring Nora. Blériot can be either ecstatic or miserable in her company, depending on how capricious she happens to be at a given moment, while Blomdale is a bit more circumspect—but still generally miserable. Eventually Blériot and Blomdale meet—almost accidentally—in London when Blériot can’t stand his life without Nora anymore (and not so coincidentally finds his marriage falling apart) and so goes to London to seek out some of her old haunts.

Lapeyre writes with great wit and sly craft on the miseries of unfulfilled relationships.