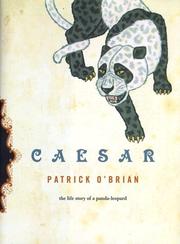 The Life of a Panda-Leopard

Juvenilia by the now-deceased O’Brian (Blue at the Mizzen, 1999, etc.), a fantasy of a panda-leopard’s coming of age first published in 1930.

In his foreword to the tale of the half-leopard, half-panda creature, O’Brian writes, “I doubt if my present self would have liked the twelve-year-old boy who wrote this tale—he certainly was not very popular among his brothers and sisters. Nevertheless, that remote being and myself, his aged descendant, are linked by a common delight in reading. . . .[T]he boy was also something of an invalid . . . and spent long periods of time in the incubator room [his father’s, a bacteriologist’s, laboratory]. . . . [T]he tasks left a good deal of time unoccupied, and since it was obviously unthinkable to bring a book to read, the boy, by some mental process I can no longer recall, decided to write one for himself, thus discovering an extraordinary joy which has never left him—that of both reading and writing at the same time.” Though this story was written by O’Brian, there is little connection to his later work, save the deep interest in the natural world shown by the famous character in his Aubrey-Maturin series of novels, Dr. Stephen Maturin. The tale, written in the first person, displays the talents of a precocious adolescent who already was adept at painting a setting and filling it with characters that are believable. The natural world, red in tooth and claw, is depicted as cold and harsh; in an early episode the young panda-leopard’s brother wanders out of the home and is torn apart by a hyena. The young panda-leopard has a variety of encounters with a variety of creatures, both animal and human, but there is little of the narrative drive that propels readers through O’Brian’s later fiction.

Though clearly the writing of an adolescent, sure to be a hit for anyone who can’t believe there are no more novels from a modern master.