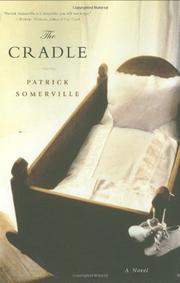 In this first novel by the author of the story collection Trouble (2006), a young man and, separately, a middle-aged woman test their capacity to love and be loved.

As a favor to his pregnant wife, Matt takes a few days off from the plant where he works to try to find the cradle Marissa had as a baby. She wants it for their son. The cradle dates back to the Civil War, and it was stolen when Marissa was 15, around the same time Marissa’s mother walked out. Neither has been seen since. With a relative’s former address as his only clue, Matt sets off, traveling through towns large and small, from Green Bay, Wis., to Walton, Minn., to Rensselaer, Ind., with a brief detour (via Internet video hook-up) to Antarctica. Along the way, Matt finds much more than he anticipated, including how his own childhood—18 years of foster homes and state agencies—shaped his feelings about family. Ten years later, in a well-heeled neighborhood of Chicago, Renee and her husband Bill prepare to say goodbye to their only son Adam, a Marine who is leaving for Iraq in a matter of days. Affable and bright, Adam believes he has a duty to serve his country—a position not shared by Renee, a children’s-book author turned poet who passionately protested the Vietnam War when she was in college. As the family works to keep their last days together normal—they go out for donuts; watch a football game on television—Renee’s feelings about Adam’s impending departure threaten to tear from her lips a long-buried secret. One not even her husband knows. Somerville’s two story lines unfold and ultimately dovetail with a quiet confidence. This meditative novel dignifies small gestures, which bring to life the compelling characters. A bonus is the fresh regional sensibility the author brings to Matt’s road trip through the Northern Middle West states.

Fresh turf for American fiction from a talented young writer.