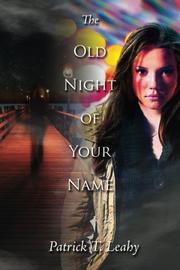 THE OLD NIGHT OF YOUR NAME

In Leahy’s intriguing debut mystery, an officer searches for a missing hunting guide in the wilderness of southeastern Alaska and uncovers secrets and lies among a village’s residents.

Life isn’t easy in the tiny village of Yakutuk. For starters, there’s the unforgiving Alaskan wilderness and its dark, frigid winters. There are multigenerational racial conflicts festering between the native people and non-natives, as well as conflicts between the poor and the not-as-poor. Add an abundance of alcohol and guns, many more men than women and an American West mythology. Men are definitely men in Yakutuk, but Norma Faunce, this novel’s female main character, refuses to be pushed around. Faunce, Yakutuk’s newly named peace officer, leads an investigation to find out what happened to the fearless, skilled hunter Ward Hubble. In a village where everyone has enemies, ex-Marine Norma is universally liked. She’s always been able to navigate the uncertain territory between the Yakutuk’s Tlingit residents and the whites and between its most unsavory elements and its upstanding citizens. But is Norma up to the task of solving a murder case? The author confidently portrays harsh Alaskan village life with verisimilitude, offering a sort of noir version of Cicely, Alaska—the charming fictional town in the 1990s TV show Northern Exposure. (For the record, Yakutuk, Alaska, doesn’t exist; however, Yakutat, in the same region, is a real place.) The village’s quirky, eccentric characters harbor burning resentments and hatreds, but many band together when the need arises. First-person narrator Norma takes readers along on her uneasy quest to solve Hubble’s disappearance as she unearths layers of family secrets, infidelities and blood feuds. She harbors her own contradictions and surprises but remains consistently well-drawn and believable throughout the novel. The book’s poetic title and its acknowledgement to poet Rainer Maria Rilke are a bit odd and the only discordant notes in an otherwise well-balanced narrative. Overall, the story’s steady pacing, complex characters and suspense will likely draw readers in.

A great read, full of local color, from an author to watch.