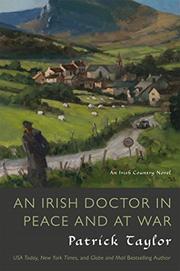 AN IRISH DOCTOR IN PEACE AND AT WAR

Taylor moves back and forth between 1960s Northern Ireland and the wartime travails of 1939-40, with minor emergencies and mysterious illnesses at home and terrifying adventures at sea. In 1966, Dr. Fingal O’Reilly is married to his first love, Kitty, but the book’s passionate romance comes as Fingal recalls his wartime courtship of first wife Deirdre, a nurse midwife in training. Taylor’s gift is dialect (there’s a glossary)—“a shmall little minute to toast and butter the bramback”—and sentences end with “so” or “bye.” When the war starts, Fingal is assigned to the battleship HMS Warspite as medical officer. Covering Royal Navy battles at Westfjord in Norway and later in the Mediterranean off Italy, Taylor’s descriptive powers are as mighty as Warspite’s 15-inch naval rifles—“[h]e had to grab onto a handrail...the noise that surrounded him like an impenetrable wall and by its force seemed to be crushing his chest.” At Warspite’s new home port of Alexandria, Taylor offers a précis on the last days of the gin-and-tonic empire as world war washed over ancient Egypt. There, lonely Fingal is tempted with a love affair. As Warspite sails, characters step aboard, most compelling the medical detachment’s stalwart leader, Surgeon Cmdr. Wilcoxson, and Tom Laverty, ship’s navigator and father of Fingal’s future partner, each of whom support Fingal, wide-eyed country doctor, who shakily steps into operating theaters where emergency amputations and bloody trepanning are de rigueur. But Fingal's true domain is Ireland's green-drenched landscape, “coarse marram grass hillocks that lay between the glen and the shingly shore," with familiar Ballybucklebo characters like young partner Barry, medical student Jenny, and his newly married housekeeper, Kinky.