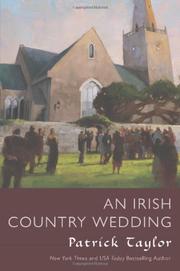 What Herriot did for Yorkshire, Taylor does for Northern Ireland’s County Antrim and County Down; minus the animals, of course, but with all the good sentiments.

Taylor’s seventh in the Irish Country Doctor series (An Irish Country Doctor, 2007, etc.) provides a dose of easy medicine to readers familiar with the 1960s milieu and characters in the fictional wee town of Ballybucklebo, where Dr. Fingal Flahertie O’Reilly practices medicine. The critical illness of Kinky Kincaid, O’Reilly’s housekeeper, sets the drama in motion, what with a strangulated bowel requiring immediate hospitalization. O’Reilly's in Belfast buying an engagement ring for fiancee and first love, Kitty O’Hallorhan, and so Dr. Barry Laverty, his assistant, diagnoses Kinky’s problem and beckons an ambulance. Now, the busy doctors of Ballybucklebo need a receptionist and housekeeper. Working-class lass Helen Hewitt’s available, having been laid off. Ah, but care must be taken so Kinky doesn’t worry she’s being shuffled out the door. Meantime, Bertie Bishop, cranky and self-absorbed townland Councillor, accuses O’Reilly’s cat of killing Bishop’s racing pigeons. Dr. Laverty soon discovers the true culprit, but he’s distracted by his incipient romance with a lovely schoolteacher and ardent member of the Campaign for Social Justice. The author notes this is the first in the series where he’s confronted the “Troubles.” He does so in a limited way, with equal measures of empathy and realism. Kinky’s afterword and recipes end the book, along with a glossary of Irish dialect.