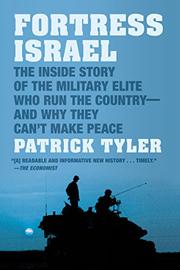 A scathing look at the belligerent mindset of Israel’s elite, from David Ben-Gurion to Benjamin Netanyahu.

Since its founding in opposition to Arab hostility, Israel remains “in thrall of an original martial impulse,” writes former Washington Post and New York Times journalist Tyler (A World of Trouble: The White House and the Middle East—from the Cold War to the War on Terror, 2008, etc.). The native-born Israelis, sabras (“the new Jews, no longer a caricature of passivism, dependence, and weakness, but a people determined to take its fate into its own hands”), represented best in such figures as defense minister Moshe Dayan, grew up on cooperative farms, sparring with local Arabs over turf, reading the Bible not for religious instruction but as a “manual for war,” and becoming radicalized while serving in the army. The new militarism superseded the romantic notions of Zionism’s founding. By the mid-1950s, Ben-Gurion began urging for immediate escalation of Israel’s military might in response to Egyptian leader Nasser’s arms spree from Russia. Dayan, Ariel Sharon, Abba Eban, Menachim Begin, Yitzhak Rabin, Golda Meir and others were enlisted in Ben-Gurion’s new offensive-thinking policy, a call for an expansion of the Jewish state through preemptive strikes. Tyler attributes much of Ben-Gurion’s new “activist strategy” to his impending retirement, deep-seated anxiety about his “weak-sister” successor and need to galvanize the support of the Israeli people. There has been a high price for this militarism—e.g., the Six-Day War, War of Attrition, border reprisals, Yom Kippur War and the current subverting of Iran’s nuclear program by secret assassinations and bombings. The tragic result of this military folly, writes the author, is Israel’s inability to generate effective diplomatic channels and alternatives for peace.

Tyler ably demonstrates how a culture of preemptive warfare and covert subversion is isolating Israel and alienating it from its founding as a progressive and humanistic state.