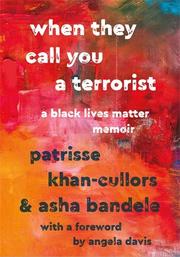 WHEN THEY CALL YOU A TERRORIST

A founder of Black Lives Matter chronicles growing up sensitive and black in a country militarized against her community.

With assistance from Bandele (Something Like Beautiful: One Single Mother's Story, 2009, etc.), Khan-Cullors synthesizes memoir and polemic to discuss oppressive policing and mass imprisonment, the hypocrisy of the drug war, and other aspects of white privilege, portraying the social network–based activism of BLM and like-minded groups as the only rational response to American-style apartheid. She argues repeatedly and powerfully that mechanisms have evolved to ensnare working-class people of color from childhood, while white Americans are afforded leniency in their youthful trespasses. She learned of such hidden codes early, and she documents her hardscrabble but vibrant upbringing in segregated, suburban Los Angeles during the 1980s. The drug war’s resurgence, and a newly punitive attitude toward the poor, cast a shadow over the lives of her endlessly working mother and her male relatives: “[My brother] and his friends—really all of us—were out there trying to stay safe against the onslaught of adults who, Vietnam-like, saw the enemy as anyone Black or Brown.” Her perspective was amplified by attending segregated, gifted schools in adjoining white suburbs, where she explored the arts and acknowledged her queer sexuality while developing a passion for social organizing. Later, her outrage over the unpunished killings of Trayvon Martin and others led her and two friends to brainstorm a new, viral social justice movement: “We know we want whatever we create to have global reach.” The author’s passion is undeniable and infectious, but the many summary-based passages sometimes feel repetitive, and the concrete narrative of BLM’s expanding activism is underdeveloped. Since she emphasizes her organizational focus as prioritizing the role of women of color and LBGT or gender-nonconforming individuals, the audience for this socially relevant jeremiad may be limited.

Not without flaws but an important account of coming of age (and rage) within today’s explosive racial dynamic.