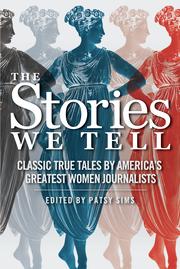 THE STORIES WE TELL

An anthology of landmark long-form articles written by female journalists.

Sims, herself a published journalist, has put together an anthology of magazine pieces by female writers. Some of the names will be well-known to readers—Joan Didion, Susan Orlean, Gloria Steinem. The essays contrast with each other in meaningful ways: murderers and survivors of murder attempts, famous and little-known figures in American history, high school students and a woman dying of Alzheimer’s. The caliber of work makes this collection a master class in the sort of long-form journalism that is published in magazines like the New Yorker and Vanity Fair, where many of these pieces were first seen. The diversity of subjects illustrates the breadth of work that is done by female journalists; it includes subjects and topics that historically might have been assigned to male journalists (such as “Soul Survivor,” Isabel Wilkerson’s profile of Black Power activist Kwame Ture, formerly known as Stokely Carmichael). There is a helpful table of contents with summaries of the stories, and short biographies of the writers precede each piece. Some essays were published recently, like “Yuja Wang and the Art of Performance,” Janet Malcolm’s profile of the young concert pianist from 2016, and others are older, like “Mrs. Kennedy at the Moment,” Gloria Steinem’s profile of Jacqueline Kennedy’s life after JFK’s assassination, which ran in 1964. (It would have been helpful if the book listed where and when each piece originally ran.) Standout stories aside from those already mentioned include “The Last Day,” Robin Marantz Henig’s story of a woman determined to end her own life after being diagnosed with Alzheimer’s, and “The Cheerleaders” by E. Jean Carroll, a heartbreaking account of a connected series of murders and suicides in Dryden, New York. Particularly wrenching is the description of a young survivor who yelled into the author’s tape recorder, “This is reality, people! This really happened, OK?” It brings the emotional work these writers do sharply into focus.

An engrossing anthology of work, full of intimate details, from veterans of magazine journalism.