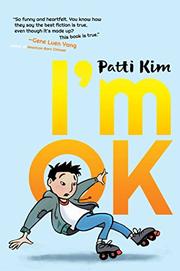 When Korean-American Ok Lee loses his father in a construction accident, he and his mom must fend for themselves financially while quietly grieving.

Middle schooler Ok watches as his mother takes on multiple jobs with long hours trying to make ends meet. Determined to help, he sets his sights on his school’s talent show. The winner takes home $100 in cash, enough to pay the utilities before they get cut off. His search to find a bankable talent is complicated by unwanted attention from bully Asa, who’s African-American, and blackmail at the hands of a strange classmate named Mickey, who’s white. To make matters worse, his mother starts dating Deacon Koh, “the lonely widower” of the First Korean Full Gospel Church, who seems to have dubious motives and “tries too hard.” Narrator Ok navigates this full plot with quirky humor that borders on dark at times. His feelings and actions dealing with his grief are authentic. Most of the characters take a surprising turn, in one way or another helping Ok despite initial, somewhat stereotypical introductions and abundant teasing with racial jokes. Although most of the characters go through a transformation, Ok’s father in comparison is not as fleshed-out, and Asa’s African-American Vernacular English occasionally feels repetitive and forced.

A work of heavy, realistic fiction told with oddball humor, honesty, and heart.