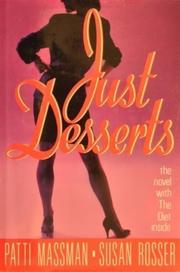 Here's the beginning of a whole new genre—the diet novel— written by Massman, co-author of Fling and Rich Men, Single Women, and Rossner, an erstwhile press secretary. And guess what? Its protagonist is overweight, by about 40 pounds, an Encino housewife and doormat for her husband, an oral surgeon named Harvey. It comes as no surprise when good old Harvey tells Diana, ``You're fat, you're boring...I suggest we think about a divorce,'' then shacks up with his dental hygienist and woos their two kids with vacations in beauty spots like Vail and Acapulco. Diana starts wearing the same sweat suit too many days in a row and sleeping with the dogs. But then a visit to her doctor turns her life around; he tells her to stop trying futile fad diets, and instead monitor her fat intake, a prescription that makes Diana's excess tonnage melt away. Sveltness brings benefits, like romance with a cute sitcom writer and a big diet book contract. Even so, Diana succumbs to Harvey, whose repentence has been spurred by one look at her beautiful new bod, though after a few days with the oaf, she goes running back to her writer beau. The low-fat message, delivered with born-again fervor, may do some fatsos good. But the rest is as predictable as the effects of binge eating and as fake as silicon.