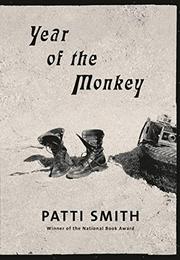 YEAR OF THE MONKEY

This chronicle of a chaotic year filled with deep losses and rich epiphanies finds the writer and performer covering a whole lot of ground.

In terms of the calendar, Smith’s latest memoir has a tighter focus than its predecessors, M Train (2015) and Just Kids (2010), which won the National Book Award. The titular year is 2016, a year that would begin just after the author turned 69 and end with her turning 70. That year, Smith endured the death of her beloved friend Sandy Pearlman, the music producer and manager with whom she would “have coffee at Caffé Trieste, peruse the shelves of City Lights Bookstore and drive back and forth across the Golden Gate listening to the Doors and Wagner and the Grateful Dead”; and the decline of her lifelong friend and kindred spirit Sam Shepard. She held vigil for Pearlman at his hospital deathbed, and she helped Shepard revise his final manuscript, taking dictation when he could no longer type. Throughout, the author ponders time and mortality—no surprise considering her milestone birthday and the experience of losing friends who have meant so much to her. She stresses the importance of memory and the timeless nature of a person’s spirit (her late husband remains very much alive in these pages as well). Seeing her own reflection, she thinks, “I noticed I looked young and old simultaneously.” She refers to herself as the “poet detective,” and this particular year set her on a quixotic quest, with a mysterious companion unexpectedly reappearing amid a backdrop of rock touring, lecture touring, vagabond traveling, and a poisonous political landscape. “I was still moving within an atmosphere of artificial brightness with corrosive edges,” she writes, “the hyperreality of a polarizing pre-election mudslide, an avalanche of toxicity infiltrating every outpost.”

A captivating, redemptive chronicle of a year in which Smith looked intently into the abyss.