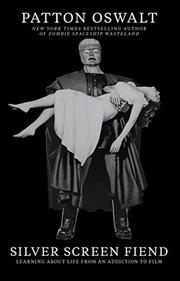 Learning About Life from an Addiction to Film

A comedian’s lively memoir about his movie addiction.

“All this filming isn’t healthy.” That's the advice given to the title character in Michael Powell’s Peeping Tom (1960), and comedian and actor Oswalt (Zombie Spaceship Wasteland, 2011) would no doubt say the same goes for viewing. In this lively memoir, the author focuses on his early 1990s career, when time was divided between hustling the Los Angeles stand-up circuit and filling his head with every available movie. As he devoured film after film, he told himself that he was getting an education: “As I filled in each hole in my movie buff’s incomplete knowledge, perhaps I was unlocking some secret level of skill I had as a comedian.” Oswalt was also thinking of the Woody Allen career arc: Germinate in the hothouses of comedy clubs and movie houses and blossom as a brilliant auteur. Instead, watching movies took over, alienating him from life and people: “Don’t they want to talk about the movies of the newly rediscovered French crime master Jean-Pierre Melville, or the Dogme 95 movement, or the dozen or so hidden references in the latest Tarantino film? Why are people so boring?” Oswalt tells a variety of interesting stories—of half-assing his way through his days as a MADtv sketch writer, pissing off Jerry Lewis, obsessing over his first tiny film role, hearing an aging actor bellow drunken commentary during a screening of Citizen Kane—but he doesn’t go out of his way to score punch lines. Actually, he’s on to something more serious, which is how movies can simultaneously inspire and stunt ambition. After all, who has time to write a screenplay when a remastered version of Dr. Strangelove starts in a few hours?

A funny, insightful homage to movie love and an honest account of growing up, personally and professionally.