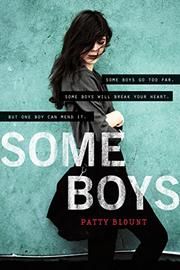 In an instructive and carefully drawn tale, Grace, who has been raped, develops a tentative relationship with Ian, a friend and teammate of her rapist.

Grace has been ostracized and taunted by classmates ever since she publicly accused a popular boy named Zac of raping her at a party. Ian is grounded after driving home from a different party drunk and running his dad’s car into a mailbox. Both Grace and Ian get in trouble with school authorities for angry outbursts, and both are assigned to clean lockers during school break. The two are drawn to each other, but mistrust and misunderstandings abound. Grace and Ian narrate alternating chapters, and questions commonly asked in the aftermath of rape are answered with details that feel true to the characters. For example, Grace wears leather boots, studded cuffs and short skirts as a reaction to her sweater-set–loving stepmother and also because the clothes make her feel tough. A scene in which Grace dons Muslim garb to protest the way girls are judged by their appearances and offends Khatiri, an Afghani classmate, feels out of step with the rest of the book, particularly when Khatiri later shows up to offer Grace support. Readers will find themselves rooting, however, both for the romance and for Grace’s and Ian’s growth.

A largely sensitive treatment of an emotionally complex topic.