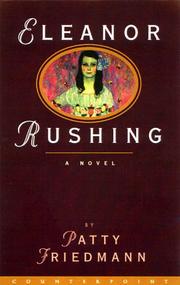 A lugubrious but moving account of a disturbed young woman’s troubled childhood and adolescence, by New Orleans second-novelist Friedmann (The Exact Image of Mother, 1991). Eleanor Rushing, like most orphans, suffers from a profound inner solitude that she has carried well into adulthood. “In case you don—t know it already, there is nothing worse than being a captive audience to dead silence.” Eleanor’s parents were killed in an airplane crash when she was ten, and she was brought up in New Orleans by Poppy (her grandfather) and Naomi (Poppy’s black housekeeper). Poppy is the silent type, as grim as cast iron and talkative as a post—which may be just as well, since when she learns of her parents” death Eleanor is struck dumb and doesn—t speak a word for the next four years. Her silence, though, may also be the result of a molestation by Naomi, who broke the news to Eleanor at her summer camp and then drove her home to Louisiana. Certainly it seems more than coincidental that Eleanor regains her speech at 14, the year she’s raped by a Tulane frat-boy. Given her catalogue of traumas, it isn—t surprising that Eleanor should eventually fall in love with Methodist preacher Maxim Walters. After following him to a convention in Nashville and starting an affair, she tries to convince him to leave his plain wife and start over with her. But Maxim worries about his reputation and even goes so far later as to request a restraining order to keep Eleanor away from him. The court that investigates Maxim’s complaint finds not only that she and Maxim were never lovers, but that Eleanor’s parents never died in any plane crash. Is Eleanor insane? Or merely deluded? The boundary between reality and fantasy can be elusive, especially when clouded by a succession of griefs. Depressing overall, but curiously affecting: Friedmann writes with a sensitivity that can touch the heart without falling prey to the sentimental. (First printing of 25,000; author tour)