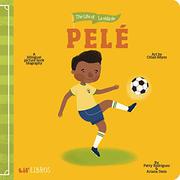 A compact biography of the legendary Brazilian soccer player.

On the verso, one-sentence facts, in clear Spanish and English, are doled out to readers opposite a full-page scene from Pelé’s life on the recto. Though voiced straightforwardly, many of the facts are interesting, such as that Pelé learned the game from his father using a ball made from a sock stuffed with newspaper. Others pieces of information feel incomplete, such as that Pelé was named after Thomas Edison—Edson Arantes do Nascimento—but readers never learn how he got the unique nickname by which he is known. In both the English and the Spanish texts, one key vocabulary word is printed in a bold and bright type, but some of the word selections are not obvious for toddler readers, who don’t know much about him (beautiful and bonito are set in boldface because that is the word Pelé used to describe the game, for instance). Simple cartoon people with slightly oversized heads are featured in the scenes of Pelé’s life, but, along with his teammates, Pelé never looks like he is older than age 12 even when he joins Brazil’s national team or he is surrounded by a diverse group of children he is teaching. Likely the most successful illustration is the gallery resembling a hall-of-fame exhibit highlighting Pelé’s achievement of scoring over 1,000 goals in his career.

Despite the clipped content, a bilingual board-book biography about a person of color is a welcome addition.