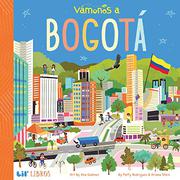 Continuing its presentation of various Latin American cities, the Vámonos series introduces little ones to Bogotá, the capital city of Colombia.

Lively, color-saturated illustrations depict some of the sights to be found in the city. Following the same format and aesthetic that characterizes the series overall, it names each sight by its Spanish name, following it with a simple statement in both English and Spanish. Children are introduced to attractions such as the hustle and bustle of San Victorino, and the unique Ciclovía concept, in which every Sunday miles of streets are closed off to cars for the enjoyment of cyclists, runners, and skaters. Further afield, children learn of the salt cathedral in Zipaquirá, built deep inside a salt mine. The food served at La Puerta Falsa restaurant might puzzle readers not familiar with Colombian vocabulary, and the English text makes no attempt to translate or explain them: “Changuas, pericos, and chocolate completo.” The book ends with a few thumbnails providing a little more information in English only. Companion volumes introduce Antigua, the old colonial capital of Guatemala, with its colorful locales and dramatic volcanoes overlooking the city; and Panama City, the capital of Panama. In the latter, a number of the sights mentioned are not in the city, such as the critically important Panama Canal, but are day trips instead.

Another satisfying outing in a charming series for young armchair travelers.