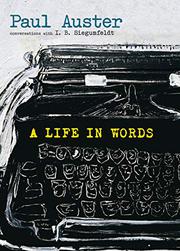 A LIFE IN WORDS

In Conversation with I.B. Siegumfeldt

A close reading of several of Auster’s works as rendered through transcribed interviews between the author and scholar I.B. Siegumfeldt.

Few contemporary novelists are studied as rigorously as Auster (4 3 2 1, 2017, etc.), particularly in Europe. There are more than 40 scholarly texts about his work, and Siegumfeldt recently opened the Center for Paul Auster Studies at the University of Copenhagen, where she is a professor of English, Germanic, and Romance Studies; this book adds another level to the discourse. In many ways, it’s an unlikely project for Auster, who has a notoriously tenuous relationship with critics, and his hesitation is apparent in many of his answers—e.g., “a writer can’t analyze his own work,” he says to Siegumfeldt in the prologue—particularly in the first half of the book, which is devoted to Auster’s memoirs and autobiographical work, including The Red Notebook (2002) and Winter Journal (2012). But Siegumfeldt is a dogged interviewer with an encyclopedic knowledge of Auster’s work, and she is mostly able to break down those barriers. Though the tone is casual and the banter between them feels mostly conversational, nonscholarly readers may find the going tough. (For Auster enthusiasts just looking to spend time in his company, Here and Now, his 2013 collection of letters exchanged with J.M. Coetzee, is a better fit.) Rather, the chapters are detailed and rely on a precise and current knowledge of Auster’s body of work. To get anything out of the conversation, it’s almost imperative to read each chapter alongside the corresponding Auster text. While some readers might be overjoyed at insights that come straight from the author, hearing his interpretation of his own fiction does, in some ways, leave little room for the reader’s own imagination.

A valuable resource much better suited to the classroom than the nightstand.