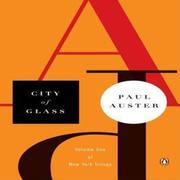 In this fast-paced thriller, poet and essayist Auster transforms a conventional detective story into a post-modern theoretical diversion, without sacrificing intrigue or readability. The first volume of his New York Trilogy, it represents the latest entry in this small press's New American Fiction Series. A wrong number in the middle of the night ensnares Daniel Quinn (once a serious poet and essayist, now the pseudonymous author of pulp mysteries) into a case far more bizarre than any he's invented in his fictions. Peter Stillman's father, an insane scholar who kept his son in a room for nine years, is soon to be released from the sanitarium. Quinn's assignment is simple: Keep the old man away from his partly rehabilitated son. But it's not really Quinn's job, nor is it that easy. The caller seeks the Paul Auster Agency, even though, as we later learn, Paul Auster is not a detective but a young writer who strongly resembles the Paul Auster who wrote this book. And this is just one of the multilayered ironies girding this splendid invention. Ultimately, as the obsessed Quinn, impersonating Auster, descends into madness—he retreats into a room once occupied by the mysterious Stillman fils—we understand the conceit which links sleuth and scribe in Auster's playful imagination. Both search for the idea which will make sense of random events and their ambiguous consequences. Has Quinn followed the right man? Is there a meaningful pattern to the man's daily walks? Such questions mislead, for as Auster writes, "the question is the story itself, and whether or not it means something is not for the story to tell." This self-reflexive detective yarn begins with the standard questions (just the facts, ma'am) and soon throws everything into doubt, including its authorship. Rather heady stuff for mystery fans, but a delight for students of experimental fiction.