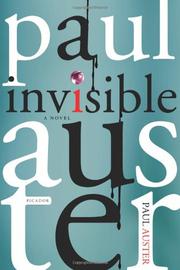 Many readers familiar with the work of Paul Auster consider him to be one of the most profound and provocative of contemporary novelists, a literary magician, a master of making fiction about the art—or the sleight-of-hand illusion—of making fiction.

Auster attracted a loyal following in the mid-1980s for what was subsequently known as his New York Trilogy—an elliptical trio of genre subversions and meditations on identity—but his reviews have been mixed in the two decades since the subsequent Moon Palace and The Music of Chance. Now comes Invisible, a novel of such virtuosity and depth that it should not only unite the faithful in a hallelujah chorus, it deserves to draw legions of converts as well. More than a return to form, this might be Auster’s best novel yet, combining his postmodern inquiries into the nature of fiction and the essence of identity—the interplay between life and art—with a thematic timelessness in its narrative of virtue and evil, guilt and redemption. If this isn’t quite Auster’s Crime and Punishment, it could be his Notes from the Underground. It’s also a novel he couldn’t have written a couple of decades ago, during what was previously considered his peak. Though it concerns a 20-year-old, literary-minded student at Columbia University in 1967—when the literary-minded Auster was the same age at the same university—its narrative reflects the autumnal perspective of four decades later, with a protagonist whose life has taken different turns than Auster’s. In fact, there are three distinct narrative voices, as sections employ the first-person “I,” the second-person “you” and the third person “he” in relating the story of how the student’s encounter with a visiting professor from Paris and his silent, seductive girlfriend changes the lives of all three and others as well. The labyrinth of plot and narrative also includes the student’s beautiful sister, a mother and daughter in France through whom he seeks atonement and a fellow Columbia alum who has become, like Auster, a successful writer. There are sins, obsessions, a corpse and a thin line between fantasy and memory. To reveal more would rob the reader of the discoveries inherent within this novel’s multilayered richness.

Auster writes of “the obsessive story that has wormed its way into your soul and become an integral part of your being.” This is that story.