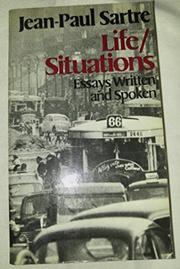 This collection of four essays (1971-73) and three interviews (1971-75) by Sartre assumes additional, touching significance with his revelation that because of blindness his "occupation as a writer is completely destroyed." Nobel Prize winner and, in the opinion of most, the Frenchman of Letters since 1945, Sartre is not concerned in his last essays with the literary and philosophical matters upon which his reputation rests. Rather, he fulminates with unrelenting outrage at instances of political oppression—most effectively, in an impassioned jeremiad against the attempted cultural genocide of the Basques by Franco-Spain. The other essays discuss the failure of traditional electoral politics, the nature of justice and the state, and the Maoist movement—in particular as they affect the French; but Sartre's Marxist alternative clearly intends international correspondences. Of the French Maoists he writes, "they realized that the old bourgeois society was doomed and was only protecting itself from death with the clubs of policemen"; moreover, they "had shown that the only relationship possible between the ruling class and the masses was a violent one." Unfortunately such phrases are closer to pamphleteering propaganda than to the subtle formulations usually associated with Sartre. Nowhere does he plausibly demonstrate the validity of his pronouncements, or convincingly detail the means by which proletariat class-consciousness will extend to the bourgeoisie and lead eventually to the socialist end he envisions. The interviews, however, bristle with intellectual vigor: Sartre's restive preoccupations as a man and writer, autobiographical reflections and reappraisals, a tartly provocative consideration of the woman's movement with Simone de Beauvoir, his latest views of his monumental study of Flaubert, and much more—these further expose one of this century's most formidable minds.