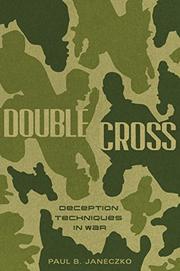 by Paul B. Janeczko

In this companion to Top Secret (2006) and The Dark Game (2010), his books on secret codes and spying, respectively, Janeczko examines how subterfuge has been used in warfare for thousands of years.

In an engaging, informative narrative, Janeczko chronicles how such deceptive techniques as concealment, camouflage, planted false information, double bluff, ruse, and more have been used to great success in battles and campaigns in the Civil War, world wars I and II, and the Korean, Vietnam, and Gulf wars. Carefully defining these terms of military art and beginning with the biblical account of Gideon, Janeczko explains how “demonstration” (false military preparations) and “feint” (distraction) were used to defeat the Midianites. A feigned retreat led to William the Conqueror’s victory in the Battle of Hastings. Confederate Gen. “Stonewall” Jackson’s masterful use of deceptive strategies made him one of the most successful Civil War commanders. The invasion of Normandy is the quintessential example of deception in extent and overwhelming success. Janeczko explains that, although principles of deception in warfare have changed little over time, the technology behind fooling the enemy has evolved dramatically. He also examines evolving attitudes about the use and effectiveness of duplicitous strategies. The narrative ends abruptly, with discussion of Gen. Norman Schwarzkopf’s use of deception techniques in Operation Desert Storm.

A fascinating chronicle of the longtime role of trickery in warfare.