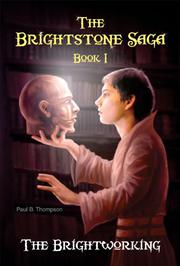 From the Brightstone Saga series, volume 1

by Paul B. Thompson

A blacksmith’s son becomes a wizard’s apprentice in this uncomplicated series opener.

Illiterate Mikal is snatched from his home village and pressed into service oiling bookbindings for the urban magicians of the Guild of Constant Working. Shortly thereafter, he is promoted to librarian/copyist for Harlano, the Guild’s cruel and remote head. The obligatory quest begins with a revelation that all the world’s magic is metal “brightworking,” derived from a lost meteoric “Brightstone.” Supposedly lost, that is—before sending Mikal and company into subsequent episodes (at least two more are planned), Thompson clumsily provides a huge and obvious clue to its whereabouts that his characters miss but readers won’t. Mikal acquires rudimentary reading skills along the way, as well as a quick-witted if mouthy sidekick named Lyra and Orichalkon, a babbling but extremely well-informed clockwork talking head. With their help, he escapes Harlano’s repeated efforts to do him in on the way to a massive fire and an invasion of the city that put him and his companions on the road.

Comfortably predictable fare for younger fans and those who prefer their fantasy charged with standard themes and tropes.