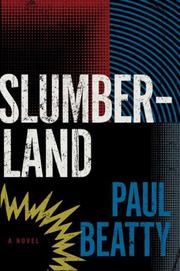 Beatty’s ferociously witty and original third novel (Tuff, 2000, etc.) follows a Los Angeles DJ called Darky, who, having created a revolutionary “perfect beat,” heads to late-1980s Berlin to find the obscure, incomparable jazzman known as the Schwa and get him to lay down a track over it.

If that sounds preposterous, it is—gloriously so. Helped by a mysterious call from a Berlin bar called Slumberland and by the near-simultaneous arrival from Germany of a man-on-chicken sex film scored by someone who can only be the Schwa, DJ Darky leaves California for a job as Slumberland’s “jukebox-sommelier,” a position he’s invented and quickly perfects. He earns a living and a reputation (and the erotic adventures that come with said reputation) by way of his encyclopedic knowledge of music, especially African-American music. Mostly what he finds in Germany, though, is the time and distance required to ruminate, with a scabrous wit that spares nothing and no one, about blackness (his own and that of others), about music, about the United States and Germany, about sex, about language. This is a book made almost entirely of riffs and harangues, but the riffs are so virtuosic and so hilarious that the reader is hard-pressed to take note of, much less to lament, minor omissions like plot or character development. Whether he’s warning against the “cutie-pie cabal” of The All-New Mickey Mouse Club; spinning a track for a philosopher skinhead; hypothesizing about Harriet Tubman or Nabokov or Big Daddy Kane; rhapsodizing about every sound he’s ever heard (he has a “phonographic memory”); or brilliantly spinning an analogy between East Germans after reunification and African-Americans during Reconstruction, DJ Darky brings the full funk. He’s not a man for half-measures, especially not for half-measures of rhetoric, and he loves nothing more than turning some anodyne myth or ill-considered conventional wisdom inside out and stomping on it for a while. Rhythmically.