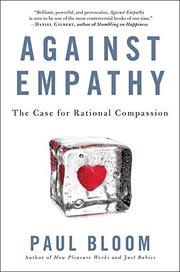 The Case for Rational Compassion

The potential of empathy to lead to cruelty prompts Bloom (Psychology/Yale Univ.; Just Babies: The Origins of Good and Evil, 2013, etc.) to promote the function of compassion, which is informed by rational deliberation.

The author distinguishes between sentimental and cognitive empathy. Without the reasoning power of the latter, impulsiveness is subject to self-deception and manipulation. Sentimental empathy is narrow, Bloom writes, “like a spotlight,” introducing bias, distortion, and/or worse. Most people are unable to truly empathize with more than one or two others at a time. Cognitive empathy enables the understanding of “what’s going on in other people’s heads.” A single case—e.g., the 2012 school shooting in Newtown, Connecticut—evokes a much stronger response than the daily murders of teenagers in inner cities around the country. We should empathize with all these people, and the billions more around the world in need, “but we can’t.” As the author shows, we need our cognitive capabilities to truly value their lives. Bloom’s argument takes in many elements of modern neuroscience and psychology in distinguishing among various mental frameworks. Neuroscience has also been used to test how empathy can distort our responses and judgments. For example, we react differently when asked to think “objectively” or from the standpoint of our feelings in considering whether terminally ill children should be moved up a waiting list for treatment or not. In this situation, by ignoring the whole picture, empathy may be both cruel and unjust. Thankfully, “we can engage in reasoning, including moral reasoning, that is more abstract.” While reason can be subject to bias and distortion, as well, we still shouldn’t belittle our rational capabilities as impotent or insignificant. People, writes Bloom, are “not as stupid as many scholars think we are.”