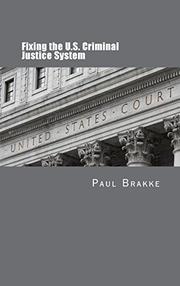 A book calls for the reform of the American criminal justice system.

The United States has the highest incarceration rates in the world and a prison system that annually imposes unsustainably astronomical costs. Even worse, Brakke (The Price of Justice in America, 2016, etc.) argues, the social costs of its dysfunction are devastating. Families are financially ruined and torn asunder by emotional distress; children are forced to grow up without their fathers; and a toxic prison culture contributes to skyrocketing rates of criminal recidivism. The author investigates the issue from a myriad of broad perspectives, thoughtfully discussing prosecutorial and judicial dereliction, police misconduct, and systemic problems like a plea-bargaining system that unfairly disadvantages poorer defendants. He excoriates the failed war on drugs, not only for its role in filling prisons with nonviolent offenders saddled with indefensibly punitive sentences, but also for its pervasive racial bias. Furthermore, Brakke blames sensationalist journalism for irresponsibly depicting defendants as guilty irrespective of the available evidence and for fanning the already hot flames of racial tension. In his passionate and meticulous book, Brakke prescribes numerous, detailed solutions to these nagging problems, including a greater emphasis on rehabilitation in prison, increased judicial discretion with respect to sentencing, and a standardized system for training police officers in the use of deadly force. Some of his suggestions are not only familiar, but also widely practiced; for example, equipping police officers with cameras to encourage better behavior. But he also offers intriguingly novel ones, like establishing separate courts for urban, suburban, and rural areas and promoting a more sensitive, localized approach to law enforcement while neutralizing the prejudices upper-class citizens harbor about inner-city life. Some of his more controversial judgments could use more empirical substantiation; for example, Brakke claims that, with respect to the media, “liberal racial bias seems to target whites.” But the study is generally rigorous and evenhanded and makes an admirable effort, in plainly readable prose, to consider opposing sides on any given issue. His measured tone is especially notable when discussing particularly contentious topics like the police use of stop-and-identify to canvass for criminal suspects.

A thorough and innovative look at a burgeoning national problem.