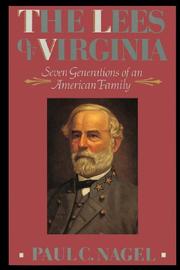 THE LEES OF VIRGINIA: Seven Generations of an American Family

Having unveiled the private heartaches of the Adams family in the superlative Descent From Glory (1982), Nagel attempts the same task with a legendary First Family of Virginia, but this time less successfully. Beginning with family founder Richard Lee, who came to Virginia circa 1640, the Lees repeatedly placed their hard-won prestige on the line in the public arena. Over the next two centuries, they numbered, to name a few, five prominent patriot brothers (including two signers of the Declaration of Independence, Richard Henry and Francis Lightfoot), dashing Revolutionary War cavalry leader ""Light-Horse Harry,"" and, of course, Robert, the great Confederate symbol of brilliance in victory and dignity in defeat. Yet envious political rivals and their own frequent pettiness blocked the Lees' path to higher office Family members usually wielded their massive influence in tandem, so that ""even when the Lees entered disgrace. . .they seemed usually to blunder ahead arm in arm,"" Nagel notes dryly. Congress excluded the quarrelsome Richard Henry from the committee that drafted the Declaration of Independence; ""Light-Horse Harry"" ensnared brother Richard Bland in his get-rich-quick schemes and, ultimately, financial catastrophe; and Harry's son and Robert's half-brother, the scapegrace ""Dark-Horse Harry,"" was ostracized for seducing his ward and for losing the family ancestral home, Stratford. Nagel examines this powerful, often troubled clan with the same searching, generous spirit he brought to the Adams family. Yet, at seven generations (compared with the Adamses' four), the Lees are too numerous and far-flung for him to tackle in the relatively short scope of this work. Moreover, for all their valor, they lack the dour Puritan sense of duty that made the Adams tribe so grimly compelling. A multigenerational saga as ambitious, accomplished, and, Finally, disappointing as the American dynasty it chronicles.